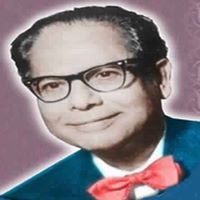 The eponym of the Academic Forum, Muhammed Ali Luqman (1898-1966), was one of the Arabian Peninsula’s most important enlighteners, authors, social reformers, and journalists in the early 20th century. He was born on November 6, 1898 in “British Aden”, where he completed his elementary, middle, and secondary education. In 1922, he received the ‘Senior Cambridge’ general certificate of education. Between 1924 and 1928, Luqman worked in the Adeni school administration. During this time, he published his first book, which dealt with the problems and barriers in the Crown Colony of Aden’s education system.

Later, in 1936, Luqman traveled to India to study law. Graduating from the University of Mumbai in 1938, he returned to Aden and began working in Aden’s British-administered courts, where he became the first lawyer originating from the region.

Luqman founded cultural and literary salons based on the Egyptian, Syrian and Iraqi models. Among them were the Arab Literature Club (1925) and the Abu Tayeb al-Mutanabbi Forum (1939), which later, together with several other salons, formed the core of civil society in South Yemen.

In 1929, Luqman formed a committee that performed the first Arab story (Saladin) as a play in Aden. Later, he himself wrote a play entitled “The Love Commander” (القائد المغرم), which was performed in 1933. He also published a series of poetic works. His novel “Saeed” (1939) was the second Yemeni novel, the first being “The Girl Qarut” (فتاة قاروت) (1928) by the Hadrami author Ahmad Abdullah al-Saqqaf (died 1950). In another novel, entitled “The Path of Pain” (1947), the first approaches to the development of the Yemeni narration and novel were formed. From 1940, Muhammed Ali Luqman published the first independent Arabic newspaper in the Arabian Peninsula “Fatat Al-Jazeera” (فتاة الجزيرة). The title – “Girl of the Peninsula” in English – indicates his unswerving commitment to the emancipation of women and to education for all. The Academic Forum Muhammad Ali Luqman builds on this rich intellectual and cosmopolitan heritage.